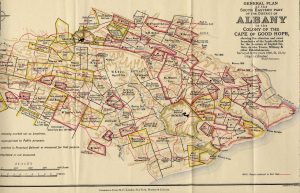 A brief history of Pomeroy

Following the defeat of Napoleon by the British, resulting in an end to the Napoleonic Wars there were many soldiers, sailors and skilled tradesmen who became unemployed, leading to mass poverty. To alleviate this problem the British Government encouraged emigration to South Africa.

Party no 33, on the Colonial Departments list was led by John Bailie from Westminster, London who had been secretary to the British War Claims Commission. His group of craftsmen and professional men left England on 9th December 1819 on the transport ship “Chapman”. This was the first Settler ship to anchor in Algoa Bay on 10th April 1820. The party settled in the area now known as Cuylerville.

Sixty four plots were measured for the planned village of Cuylerville and three of these now form the present day Pomeroy. These plots were allocated to John Duffy, William Blair and Frances Whittle.

Of these three only Whittle stayed on. Originally a farmer from Shropshire his knowledge of agriculture stood him in good stead and by 1824 he had land under cultivation and owned 50 head of cattle. He managed to survive the frontier wars, commanding the Burger Forces at Cuylerville when it was besieged in the 6th Frontier War of 1846. In 1847 he purchased Duffy’s share of the general location, but sadly his homestead and haystacks on Pomeroy were destroyed in the defence of Cuylerville in 1851. He died in 1873 leaving his property and cattle to his wife and children, their descendants still live and farm in the area.

The church and cemetery are surviving memorials to these early settlers. Cuylerville church is located just outside the perimeter of Pomeroy and is now a National Monument. Services are still held.

Surviving early settlement, wars and various attempts at agriculture; a period of time as a cattle and goat farm Pomeroy has now taken on a new life as a small game and nature reserve. The land is a mixture of open veldt and bush providing the perfect environment for indigenous flora and fauna. Well maintained tracks throughout the reserve provide easy access to most areas and there are places to stop, rest and watch.

The current owners are keen to build on the work started by the previous owner and increase the species that live on Pomeroy. News of new additions will be detailed on the website – so watch this space!

Go for a walk and you never know quite what you will see. Binoculars are a must but just look around your feet , it’s amazing how close you can pass some by some of the smaller animals without even spotting them. Many are well camouflaged, tortoises in particular.

For bird lovers there is much to see, just sit and wait. From the colony of brightly coloured weaver birds on one of the dams to a variety of sunbirds, kingfishers, and other water-birds. There are so many to see from small to large, seed eaters to raptors.

Pomeroy Lodges on Pomeroy Reserve is 30 minutes from Port Alfred in the Eastern Cape of South Africa. Book your stay with our premium partners.